On the 27th may 2013- 2nd June, I and two Other cadets from the squadron travelled down to Manchester for the north region marching band. We were the only 3 cadets from Scotland and the rest were English! When we first got down there we had never seen the music before and we were expected to learn it for Sunday, as that was the day we were marching in the Manchester Day Parade in front of thousands of people. During the week we done other non musical activities like shopping, disco and clay p...

Congratultions to all of the staff who recently passed their risk assessment course over the weekend. FS Russell, AWO Brown, Sgt Russell, CI Thornber, CI Mason and Cdt Sgt Gilchrist all passed, now making the squadron the safest its ever been!

Flight Sergeant Russell represents the squadron at the flag raising ceremony, as part of the armed forces parade in Cupar this afternoon. Pictured with Sea Cadets and Lord Provost of Fife

Congratulations to Sgt R Gilchrist for progressing through region and onto Inter- Region (Corps) athletics. Sgt Gilchrist presented not only the squadron but the entire of S&NI region at 100m Relay and the Long Jump at RAF Cosforfd, England. He succesfully walked away with a bronze at long jump and his Corps Blues and 1 Corps Athletics Cheveron, well done.

On the night of the AFI, some cadets were awarded the different annual trophies that are up for grabs. Sqdrn Ldr McAdam was there to present them to the cadets.

Congratulations to all who reieved a trophy and those who didn't recieve one, wel...

1370 Leven Squadron recentely was visited by Sqdrn Ldr Mcadam and Wing Commander Wallace, on the night the cadets were undertaking several activities such as First Aid, Radio and drill training. FS Russell accomadated the officers and showed them around the sqadron whilst chatting and discussing the squadrons future goals for the upcoming year ahead. Sqdrn Ldr mcadam and Wing Commander Wallace was chatting to everal cadets asking what they want to acheive, the officers were keen to get alot o...

On the 3rd of June, cadets from 1370 (Leven) Squadron particapated in the Wing drill competition. On succeding at the squadron to perfect the drill sequence we all went to compete on the sunday morning. Being the Last Squadron to be inspected was a bonus in itself as we were able to spend the morning practicing the drill sequence and brush off any imperfections.

After the drill sequence, we were praised greatly by Wg staff officers and the wg DI, it couldnt of went better, now we ... 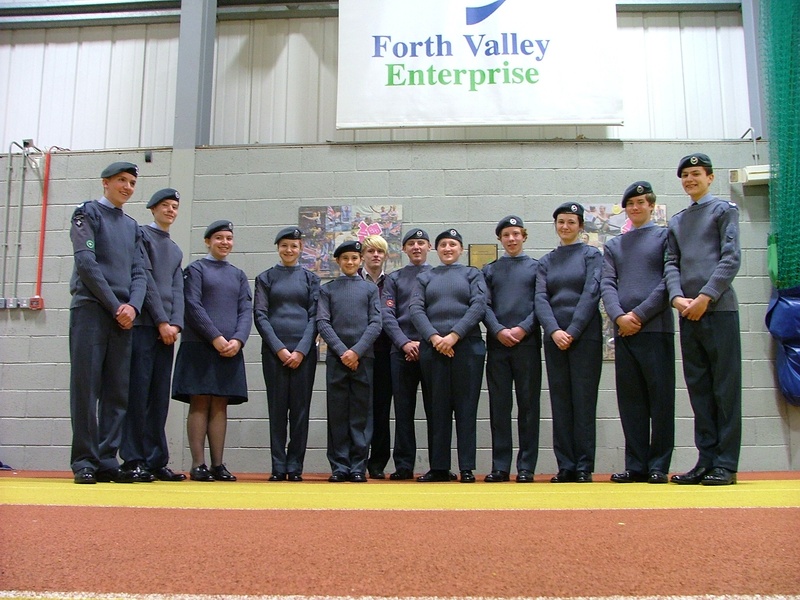 Well done to those who won and are progressing onto interwing level:)

Congratulations to Sgt Gilchrist and Cpl Pentland for recieving a promotion. They were given the promotion on the basis of there attendance, record of training, punctuality and their standards of Drill,Dress and Discipline.

Promotions are still open to cadets within the next month, keep you standards up and keep your nose out of trouble and you may be in with the chance to have ' a pair of stripes'.